For 45 years, Tet always brings back a very painful memory. It reminds us the Tet 1968 Massacre in Hue, the most brutal atrocity and genocide of the Vietnam War the North Communists committed against the South. The number of innocent persons killed by the enemy would have been higher if the U.S. Army was not present. As Hue citizens, we were deeply grateful to those American soldiers who saved our lives. We have never had an opportunity to say thank you and to let you know how much we appreciate your sacrifice. Tet 2013, we would like to invite you and Vietnam Veterans who fought for Hue 1968 to the 45th annual Battle for Hue Memorial Service organized by the Committee of Prosecuting Vietnamese Communist Criminals located at:
Community Services Building
8200 Westminster Blvd., Westminster, CA 92683
1:00 PM Sunday, February 10, 2013

We would like to have you there as we acknowledge our loyal allies and you are definitely in the list.

On 31 January 1968, the first night of Tet (the traditional Vietnamese New Year Celebration), North Vietnamese Communist leaders launched the offensives while the two sides were in a four day cease fire promise. When Tet began, 10,000 communist troops attacked Hue, South Vietnam. During 22 day occupation, the Communist forces slaughtered 5,327 civilians in Hue, including unarmed South Vietnamese servicemen, civil servants, students, and ordinary citizens. Besides 5,327 victims whose deaths were confirmed after the revelation of the mass graves, the fates of 1,200 Hue civilians are still unknown.

Defended by South Vietnamese Army and recaptured when the U.S. marines, 5th Marine Regiment, the 101st Airborne Division, along with the 1st Cavalry Division arrived and fought heroically, Hue was finally liberated from the enemy. The battle for Hue lasted nearly a month, before the enemy was finally defeated with 90% killed.

A total of 142 U.S. marines were killed in the fighting for Hue and another 1,100 or so were wounded. The South Vietnamese Army lost 333 men killed and 1,773 wounded in the operation and the Vietnamese marines another 88 killed and 350 wounded. The 1st Cavalry Division reported losses of 68 killed and 453 wounded while the 1st Brigade, 101st Airborne Division, listed its casualties as 6 dead and 56 wounded (history.army.mil).

Please let us know if you are attending the memorial service by February 2, 2013. 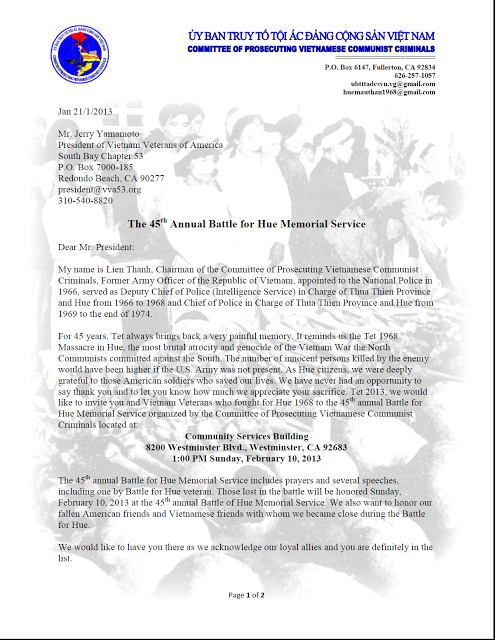 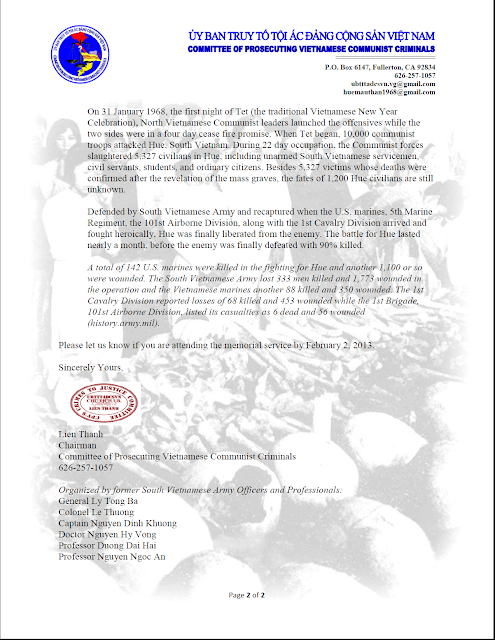